23 Years after My Father’s Death: “A Poet’s Family Album” 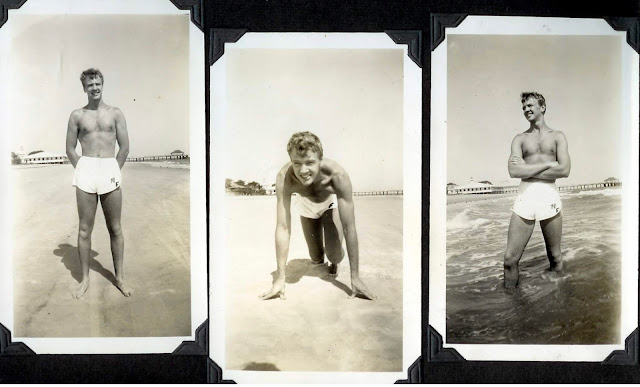 Originally published in A Man’s Journey to Simple Abundance, edited by Sarah Ban Breathnach, July 2000.
Posted by Christopher Dickey at 9:07 AM No comments: Links to this post

James Dickey: "How to Enjoy Poetry"

This article was commissioned as part of a paper company's corporate image campaign, which might have made Dickey a little uneasy. He was a survivor of the ad business in the "Madmen" era and he had no love for it. But as a professor who adored teaching he wanted to answer the question, and this piece, with reason, has been used in many classrooms since. (I am publishing the original text here after posting a recent Arabic version on Facebook.)

What is poetry? And why has it been around so long? Many have suspected that it was invented as a school subject, because you have to take exams on it. But that is not what poetry is or why it is still around. That's not what it feels like, either. When you really feel it, a new part of you happens, or an old part is renewed, with surprise and delight at being what it is.

Where poetry is coming from.

From the beginning, men have known that words and things, words and actions, words and feelings, go together, and that they can go together in thousands of different ways, according to who is using them. Some ways go shallow, and some go deep.

Your connection with other imaginations

The first thing to understand about poetry is that it comes to you from outside you, in books or in words, but that for it to live, something from within you must come to it and meet it and complete it. Your response with your own mind and body and memory and emotions gives the poem its ability to work its magic; if you give to it, it will give to you, and give plenty.

When you read, don’t let the poet write down to you; read up to him. Reach for him from your gut out, and the heart and muscles will come into it, too.

The things around us—like water, trees, clouds, the sun—belong to us all. How you see them can enhance my way of seeing them...and just the other way around!

Which sun? Whose stars?

The sun is new every day, the ancient philosopher Heraclitus said. The sun of poetry is new every day, too, because it is seen in different ways by different people who have lived under it, lived with it, responded to it. Their lives are different from yours, but by means of the special spell that poetry brings to the fact of the sun—everybody's sun; yours, too—you can come into possession of many suns: as many as men and women have ever been able to imagine. Poetry makes possible the deepest kind of personal possession of the world.

The most beautiful constellation in the winter sky is Orion, which ancient poets thought looked like a hunter, up there, moving across heaven with his dog Sirius. What is this hunter made out of stars hunting for? What does he mean? Who owns him, if anybody? The poet Aldous Huxley felt that he did, and so, in Aldous Huxley's universe of personal emotion, he did:

Up from among the emblems of the wind into its heart of power,
The Huntsman climbs, and all his living stars
Are bright, and all are mine.

The beginning of your true encounter with poetry should be simple. It should bypass all classrooms, all textbooks, courses, examinations, and libraries and go straight to the things that make your own existence exist: to your body and nerves and blood and muscles. Find your own way—a secret way that just maybe you don’t know yet—to open yourself as wide as you can and as deep as you can to the moment, the now of your own existence and the endless mystery of it, and perhaps at the same time to one other thing that is not you, but is out there. A handful of gravel is a good place to start. So is an ice cube—what more mysterious and beautiful interior of something has there ever been?

As for me, I like the sun, the source of all living things, and on certain days very good-feeling, too. "Start with the sun," D. H. Lawrence said, "and everything will slowly, slowly happen." Good advice. And a lot will happen.

What is more fascinating than a rock, if you really feel it and look at it, or more interesting than a leaf?

Horses, I mean; butterflies, whales;
Mosses, and stars; and gravelly
Rivers, and fruit

Go back and read this list—it is quite a list, Mark Van Doren's list!— item by item. Slowly. Let each of these things call up an image out of your own life. Think and feel. What moss do you see? Which horse? What field of corn? What brambles are your brambles? Which river is most yours?

The poem's way of going

Part of the spell of poetry is in the rhythm of language, used by poets who understand how powerful a factor rhythm can be, how compelling and unforgettable. Almost anything put into rhythm and rhyme is more memorable than the same thing said in prose. Why this is, no one knows completely, though the answer is surely rooted far down in the biology by means of which we exist; in the circulation of the blood that goes forth from the heart and comes back, and in the repetition of breathing. Croesus was a rich Greek king, back in the sixth century before Christ, but this tombstone was not his:

No Croesus lies in the grave you see;
I was a poor laborer, and this suits me.

That is plain-spoken and definitive. You believe it, and the rhyme helps you believe it and keep it.

Some things you'll find out

The possibilities of rhyme are great. Some of the best fun is in making up your own limericks. There's no reason you can't invent limericks about anything that comes to your mind. No reason. Try it.

The problem is to find three words that rhyme and fit into a meaning. "There was a young man from..." Where was he from? What situation was he in? How can these things fit into the limerick form—a form everybody knows—so that the rhymes "pay off,” and give that sense of completion and inevitability that is so deliciously memorable that nothing else is like it?

How it goes with you

You will come to understand the world as it interacts with words, as it can be re-created by words, by rhythms and by images.

You'll understand that this condition is one charged with vital possibilities. You will pick up meaning more quickly—and you will create meaning, too, for yourself and for others.

Connections between things will exist for you in ways that they never did before. They will shine with unexpectedness, wideopenness, and you will go toward them, on your own path.

"Then...," as Dante says,"... Then will your feet be filled with good desire." You will know this is happening the first time you say, of something you never would have noticed before, "Well, would you look at that! Who'd 'a thunk it?"

"I thunk it!"
Posted by Christopher Dickey at 11:47 AM 2 comments: Links to this post

Posted by Christopher Dickey at 3:34 AM No comments: Links to this post

Posted by Christopher Dickey at 1:44 AM No comments: Links to this post

Pat Conroy: Lord let him die, but not die out.

Pat Conroy died last night, and his passing is a tremendous loss.

In 2007, ten years after James Dickey's death, Conroy gave a wonderful speech at the University of South Carolina reminiscing about his experiences as his student, and the impact Dickey's teaching had on his own writing. But it speaks to the work and the aspirations of all writers, and tells us much about Conroy himself. These are some excerpts from his hand-written text.

Here, Conroy alludes to Dickey's scandalous personal reputation, grabbing wild metaphors out of the sky, and out of James Dickey poetry, as only Pat Conroy could do: 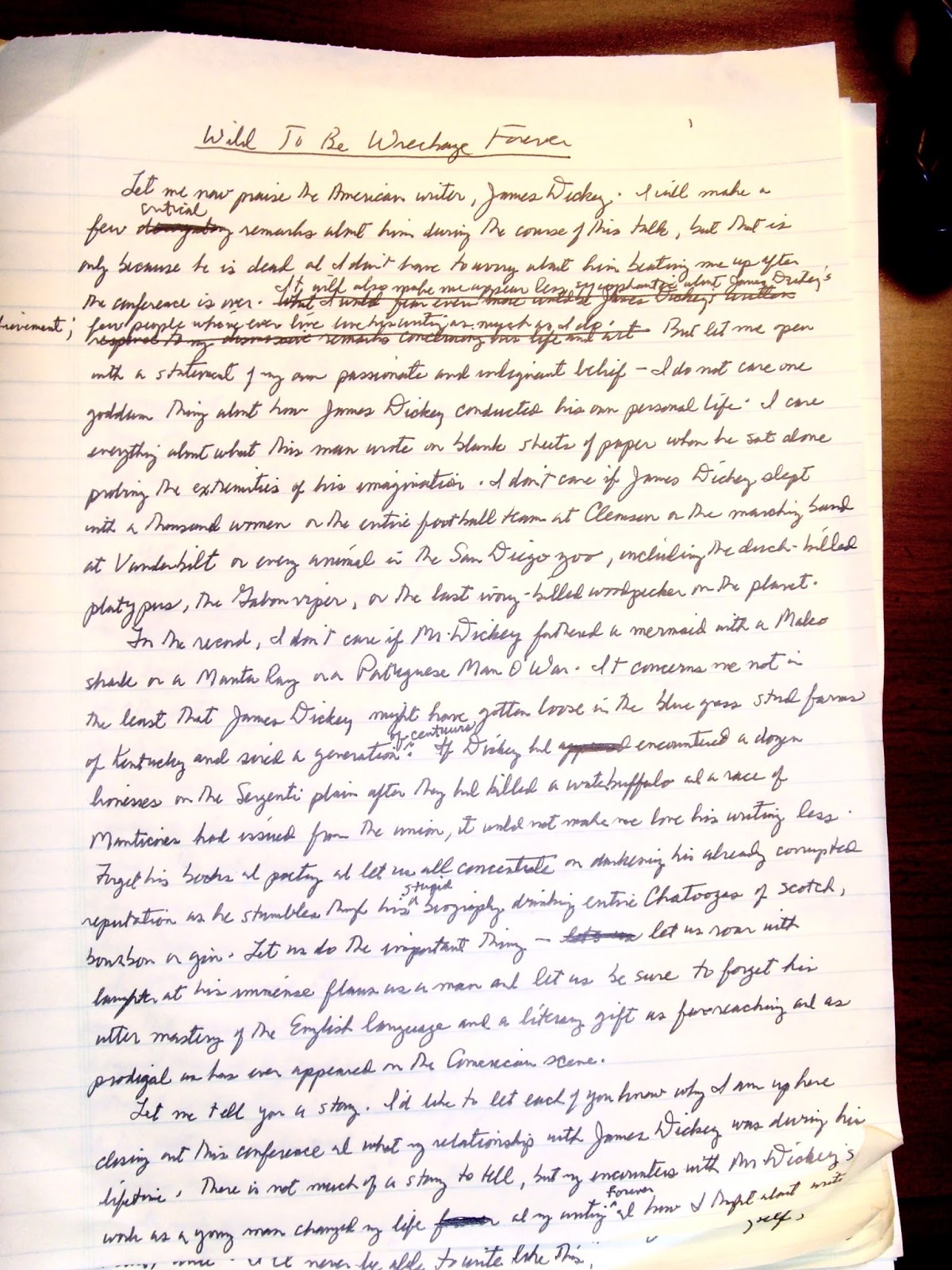 Here Conroy talks about how much Dickey reminded him, at first, of his father, “The Great Santini.” But Conroy loved Dickey’s writing, and his teaching, maybe almost as much as he hated his own father’s brutality. 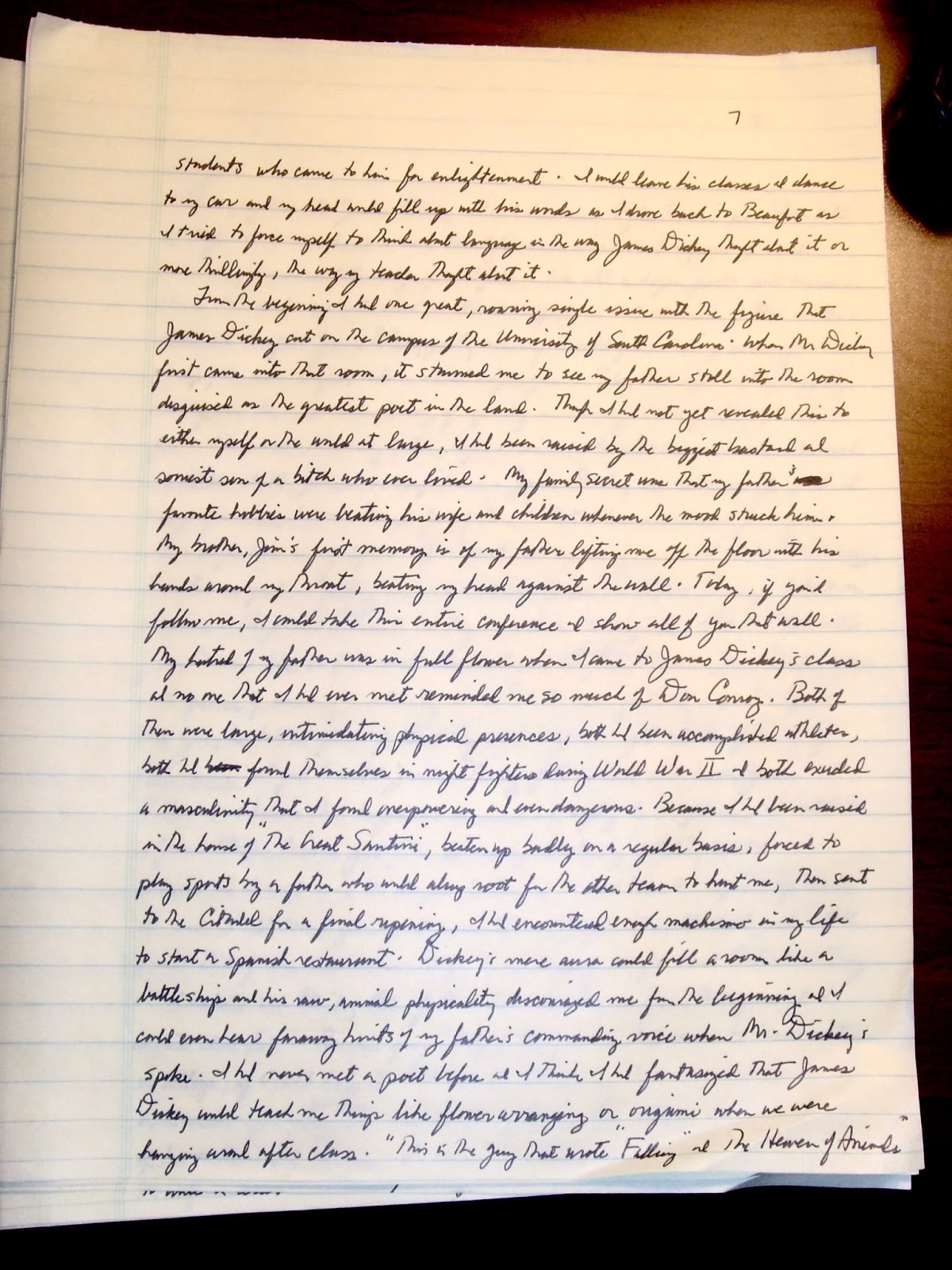 On these last two pages, Conroy puts "political correctness" in its place before a ringing conclusion, "a prayer," as he calls it, about the work of James Dickey that speaks to the hope of every artist. 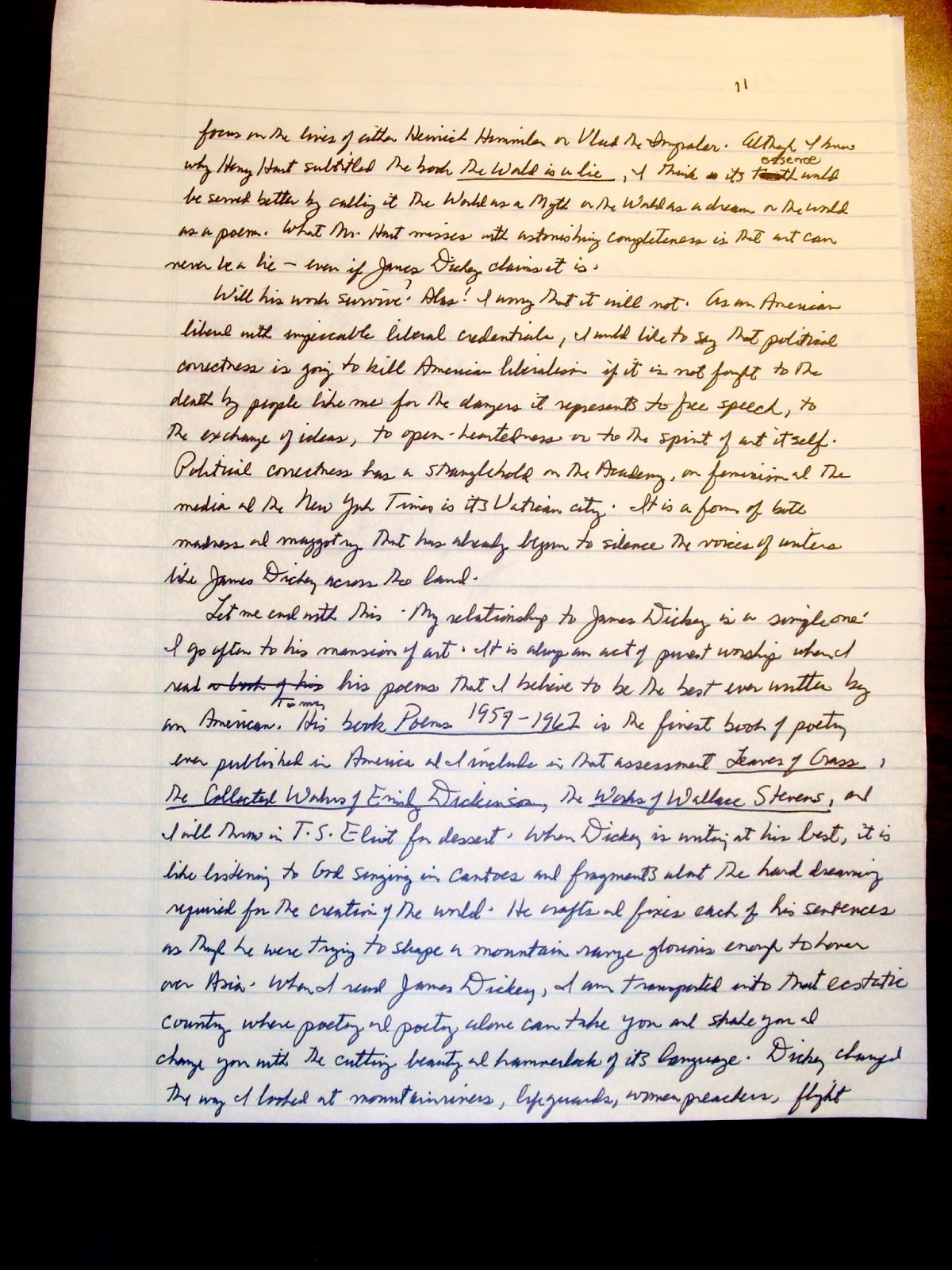 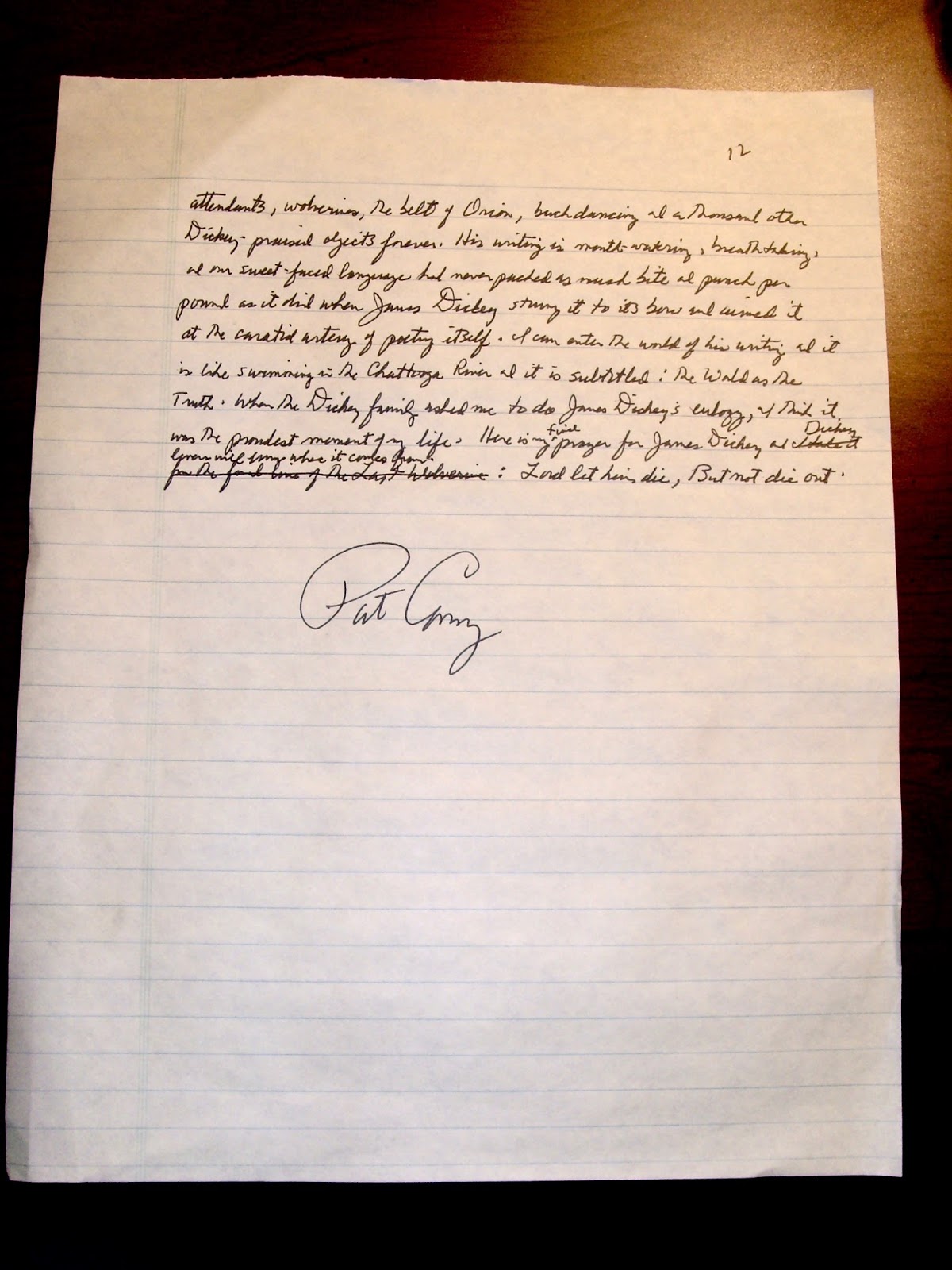 An excellent review by Gary Kerley of James Dickey's "Death, and the Day's Light"

You must read this review, published here as a PDF by The South Carolina Review.

"This important volume gives readers the chance to keep Dickey’s poetry at the center of his literary life, where it belongs." 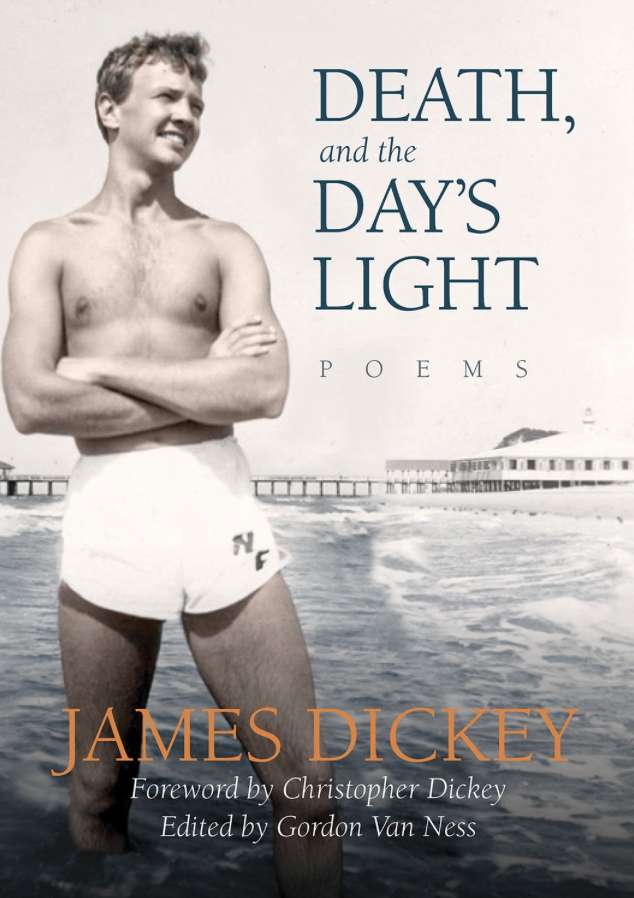 Posted by Christopher Dickey at 1:24 PM No comments: Links to this post